Direct-booking holiday value with “spain-houses.info” for the best villa and apartment holidays of at the cheapest rates.

Jalon valley is named after that also includes the municipality of Llíber. The area hosted several prehistoric cultures that left their mark in places such as the Cave of Wonders and the peaks of the Solana. Levantine rock paintings highlight the ravine of Manzano. There is no shortage of Roman ruins. Originally, Jalon was a conglomeration of Arabs farmsteads. Arab rule lasted more than five hundred years, from the beginning of the eighth century. In this era are Aixa Castle which are remains in the top of the Solana and the Bernia saw no vestiges of the (above the "strong" sixteenth century). Each castle overlooking a term castrale and population was divided into numerous hamlets whose names have survived in the names of the games rural: Cau, Cuth, Murta, Benibrai, etc.).. By 1244, King James I conquered this land and were incorporated into the Christian kingdom of Valencia but continuously populated Mudejar until they were expelled.

After the expulsion of the Moors in 1609, one of these settlements, called Rafol Jalon, was repopulated by peasants from the islands of Majorca and Ibiza. The largest number of these settlers came from the Majorcan resort of Santa Margarita, and became the ancestors of today jalonenses. The core primitive or Rafol, next to the river Landmark or Gorgos and characterized by narrow streets and irregular outline, is the oldest part of the current Jalon. 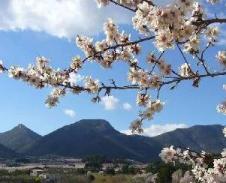 The Sierra de Bernia is a mountain range which belongs to the Betic Cordilleras and located in the southeast of the Iberian Peninsula in the province of Alicante.

View of the Sierra de Bernia on a foggy day, from the fort of Philip II (south side). The mountain range extends about 11 km from west to east, perpendicular to the Mediterranean coast. The saw has an area of 1,900 hectares, divided between the municipalities of Callosa Ensarriá, Altea, Calpe, Benissa and Jalon. The highest peak of the Sierra de Bernia, which is used as a trig point, is found in the town of Jalon, and measures 1128 meters over sea level.

Bernia Fort: In 1562, by order of Philip II, was built on the southern slopes of the mountain called Fort Bernia. Aiming to avoid the situation arising in 1526 with the revolt of the Moors, who settled on that site for months, the purpose of the building was, on one hand, prevent the riots of Moors and, secondly, to defend the coast of the frequent attacks by pirates. To this end essentially defensive (which had strong detractors among military prestige, the viceroy Vespasian Gonzaga, who considered the strong little less than useless), we add the fact profoundly symbolic of the installation of a fort and a contingent of troops king's eminent position of dominance over an area mansion.
Although often report that the Moors were strong for a year in 1609, the data is false, as this confuses the rebellion of 1609 (which had its setting in La Vall de Laguar) with Bernia 1526. After the expulsion of the Moors in 1609, between 1612 and 1613 was dismantled, because their supply was complicated by its remote location, and made no sense to leave a building of this type without garnish. Currently you can see many remains of the fort: canvas walls, domed buildings, moats and towers of the fort. From the remains of this fortification situated to 803 meters, you can visually monitor the entire coastline between Cabo de la Nao, Javea, and the port of Alicante, on clear days, you can even see the island of Ibiza .

Its climate is mild with mild winters and pleasant summers by the proximity of the Mediterranean Sea. The wettest month is usually October. A Milestone ideal time to visit is between late February and early March, which is the time when almond trees blossom after the harshest winter months. The whole valley white shade into whose beauty is impossible to describe with words. The early flowering almond trees is the tree that announces the arrival of spring in the Spanish Levant.